Posted at 07:25h in Quotes and Inspiration by abby 0 Comments 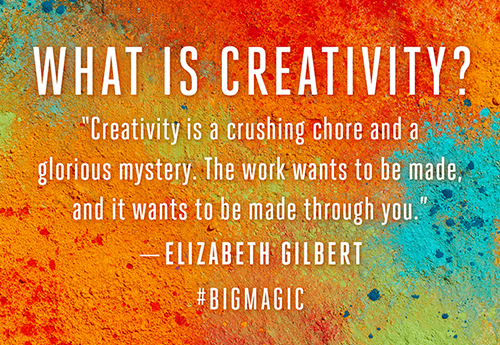 I had one of those moments last week, when you read, watch, or hear something that resonates within your core and slightly changes your perspective and you know that you won’t ever be the same again. For me moment happened when I watched Elizabeth Gilbert’s TED TALK called: Your Elusive Genius.

Gilbert is the author of the international best-seller: Eat, Pray Love (remember THAT one?). She gave this talk in 2009 and has been extraordinarily popular (talking millions of views), but I only discovered last Wednesday! Artists and anyone who has felt a moment of sheer genius or struggled with creativity should listen to the talk.

Gilbert explains that society or at least artists themselves should have a shift in thinking that instead of a person “being” a genius they should believe they “have” a genius. It’s easier if Gilbert explains her view of creative genius herself. Here is an expert from an Etsy interview on the topic:

“I’ve always embraced magical thinking when it comes to creativity. I see inspiration as a mysterious external force that comes to us from unknown realms, in order to collaborate with our imaginations. This is how humans saw the artistic process for thousands of years, and it still works for me! I certainly like this fanciful approach to creativity better than the modern notion of the tormented artist, suffering alone in anguish and martyrdom.”

Wow, right. Watch her talk, seriously. I’d prefer to stop the roller coaster of emotions as a working creative, so I took hold of this idea of separating of the moments of amazing creativity from the day to day routine of practicing art. I like the idea that I have a bit more control and that with genuine effort in my projects, inspiration and brilliance will find me. It’s kind of a lovely idea to not beat up yourself if something isn’t quite working on a project. There’s nothing wrong with you. Your genius was on break or just didn’t show up that day, but she’ll be back. It’s not the end of the world. And it’s also a lovely thought to be humble when you to experience a moment of pure creative bliss. I know it sounds a little silly, but we all need a little help in this world! As Winnie-the-Pooh says, “It’s much friendlier with two”.

Expanding off of this TED TALK and a few other talks, Gilbert has written a book on the subject of creativity. The book has an awesome title. It’s called: BIG MAGIC. The cover was revealed last week. 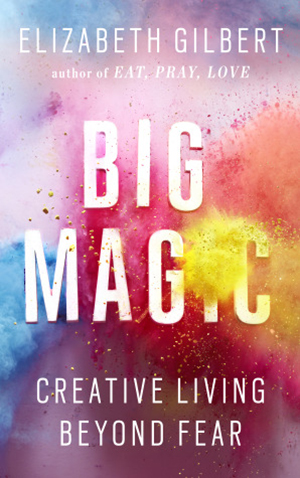 The book will be released on September 22nd of this year. You can pre-order copies now, too through Penguin Books. I will be reading it and hope you will join me. I’ll leave you with one more quote from Gilbert explaining the title: