05 Nov Perhaps a Gift for You

Posted at 14:14h in Happenings by abby 0 Comments 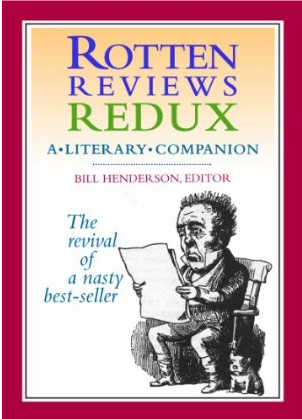 Gift Alert for book lovers!
25 years ago, Bill Henderson, an Editor from Pushcart Press, pulled together a collection of the most scornful, cynical, and down right harsh reviews of some of the world’s most celebrated works of literature. On November 22nd, Rotten Reviews Redux—new edition of this collection— is being published with an updated preface from Henderson. These book reviews are hilarious! I hope you scoff and laugh at the short sighted critics as I did! Want a taste of what kind of scathing reviews we’re talking about? Here you go!

“Here all the faults of Jane Eyre (by Charlotte Brontë) are magnified a thousand fold, and the only consolation which we have in reflecting upon it is that it will never be generally read.” -James Lorimer, North British Review, 1847, on Wuthering Heights by Emily Brontë (Ha! Silly James)

“Whitman is as unacquainted with art as a hog is with mathematics.” -The London Critic, 1855, on Leaves of Grass by Walt Whitman (Ouch!)

“An oxymoronic combination of the tough and tender, Of Mice and Men will appeal to sentimental cynics, cynical sentimentalists…Readers less easily thrown off their trolley will still prefer Hans Andersen.” -Time, 1937, on Of Mice and Men by John Steinbeck (Ooooo, that hurts)

“What has never been alive cannot very well go on living. So this is a book of the season only…” -New York Herald Tribune, 1925, on The Great Gatsby by F. Scott Fitzgerald (Ooops, unless the Tribune, meant being read every school season!)

How many of these classics have YOU read?