Posted at 07:32h in Happenings, Recipes by abby 0 Comments 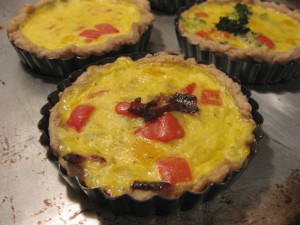 Happy Friday everyone!  Thankfully, I survived the unbearably awful heat wave. I even had a bit of foresight earlier in the week by making several individual quiches in order to not have to touch the stove or the oven during our last 48 hours of 90+ heat. (alas this apartment and studio is without a/c). My little quiches were such a hit with D and myself that I want to share the recipe with all of you too. Are you ready for another round of kitchen magic?

D’s mother gifted me the individual tarte/quiche pans for Christmas. Yes, it has taken me this long to actually try them, but it was so worth the wait! Since we had six pans, I wanted to make a base egg and cheese mixture and then customize each pan with different vegetables and offer D a meat option. Everything I used, I already had in the house, so it truly came together very quickly and easily.

I also made a whole wheat crust, just to shake things up a little. I used my pie crust recipe from The Magnolia Bakery Apple Pie and substituted one of the white flour cups for a cup of whole wheat flour. Here are the details:

TO MAKE THE CRUST

Combine the white and wheat flour and the salt in a large bowl. Using a pastry blender (the most handy tool in my baking arsenal) cut in the butter and then cut in the shortening. I find it easier to add them separately. Keep blending until the mixture resembles crumbly sand and has small pea size pieces of the butter and shortening.  Add in the ice water and toss with a fork until the dough is moistened. Using your hands, gather the dough together into a large ball. Wrap it tightly with plastic wrap and refrigerate for 30 minutes.

Now it time to prepare the egg and cheese mixture along with the vegetables and the bacon. Yes, bacon. We had some left over maple bacon stripes from the weekend, so not wanting them to so to waste, I decided it would be a nice touch to add some crumbled bacon bits into a couple of the quiches. I cooked about 3 strips of bacon. While the bacon is sizzling, I diced up the onion and sweet peppers. Both the onion and peppers went into my base egg mixture.  For cheese, we had a Cabot Garlic & Herb Cheddar block in the frig. It was wonderfully garlicy and turned out to be a great cheese to use for quiche, but, you can use a Swiss or Gruyere as well.

BASE EGG AND CHEESE MIXTURE

½ cup of sweet peppers (I used yellow and red pepper)

PULLING IT ALL TOGETHER

Set oven to 375 or 400 degrees depending on your oven. My runs cooler, so I tend to increase the heat.

Chop the peppers and onions and sauté them in a bit of olive oil, until they are just beginning to soften. It won’t take long, maybe about 2-3 minutes. While, they are cooking, in a medium bowl, whisk together the eggs and egg whites. Add in the shredded cheese, milk, and flour. If you are wondering why Soy Milk, well that’s the only milk I have in the house (D prefers it), so that’s what I used. Simple as that. Mix in the cooked peppers and onion to the egg and cheese mixture. Add a dash of cayenne pepper and salt and pepper too.  Set that aside.  Note: If you want extra vegetables, sauté them now as well. 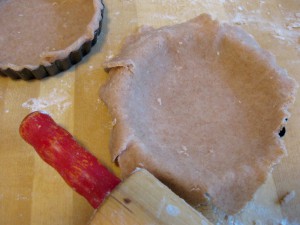 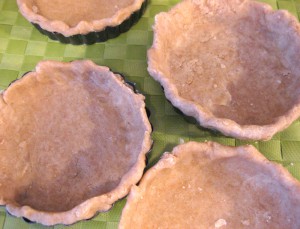 Bring out your chilled pie crust to a floured flat surface. I cut the ball in thirds and rolled one piece out to fit my 4” quiche pan. Trim the excess dough and fold and crimp edges. Repeat until all 6 pans are lined with dough.  Position the 6 pans onto a cookie baking sheet and place in the oven for 4 minutes. The dough just needs to begin to partial bake.  Pull them out and set them on the stove. Turn the oven down 15 degrees (350 or 375).

Now’s let’s fill our quiches! If you are customizing your individual quiches, then place the extra veggies or meat into the dough-lined pans first. For example, in a couple of pans I placed crumbled bacon pieces and then transfer some egg mixture into the pan. I like using a ¼ measuring cup to fill my quiches. Other pans received sliced jalapeños AND bacon and another quiche was all veggie, with added sautéed broccoli.

Place filled quiches back in the oven for about 15-20 minutes. You want the mixture to be solid and slightly golden brown on top. Serve immediately. 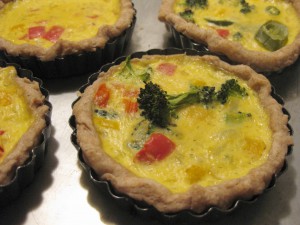 The first couple of nights we served our quiches with a green salad. Last night I sautéed fiddle heads with the remaining broccoli.—a very tasty side dish. We had these quiches 3 days in a row since each was slightly different and they were so delicious. Plus—the quiches reheat very well in a toaster oven. Bonus!