I’m still relatively new to Rochester, so one of my goals during this first year is to reach out and experience the Rochester community. During the winter, I participated in the Art House Co-op’s Sketchbook II project. I used my sketchbook to explore the nightlife of Rochester by visiting just over a dozen bars in the city. They ranged from pool hall dives to a chocolatrie. Here’s a peak at what I saw: 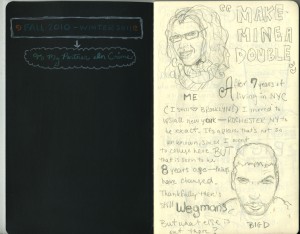 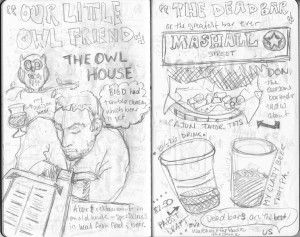 Last night with my willing partner, my boyfriend, we sought out to be a part of the Rochester scene once again. Decked out in black clothing and holding flashlights we descended upon The Strong Museum of Play.

Tonight we would participating in the photo project called THE BIG SHOT. Rochester Institute of Technology, my former undergraduate college, conducts this event. Last night’s photo was the 26th photo of a landmark from around the world.

What makes this project so much fun is that it requires a large mass of people to illuminate the selected building while a long exposed photo is taken. The volunteers use big and small flashlights and flashes on cameras to achieve the deserved lighting. For this photo, the official camera was situated on the fifth floor in a building across the street from the museum. My boyfriend and I were part of the group whose job it was to illuminate the trees leading up to the entrance and one corner of the museum itself. 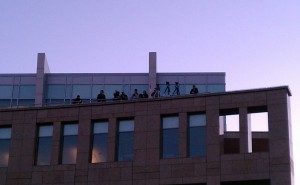 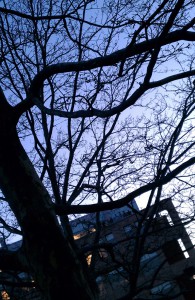 It was very chilly after the sunset, so I was thankful that one of the rules was you had to keep your light source moving AND your body too. Swaying back and forth shining my light skyward, it felt great to be part of a community project here in Rochester. In a couple of weeks, we will receive our copy of the official Big Shot photo. I can’t wait to see it!